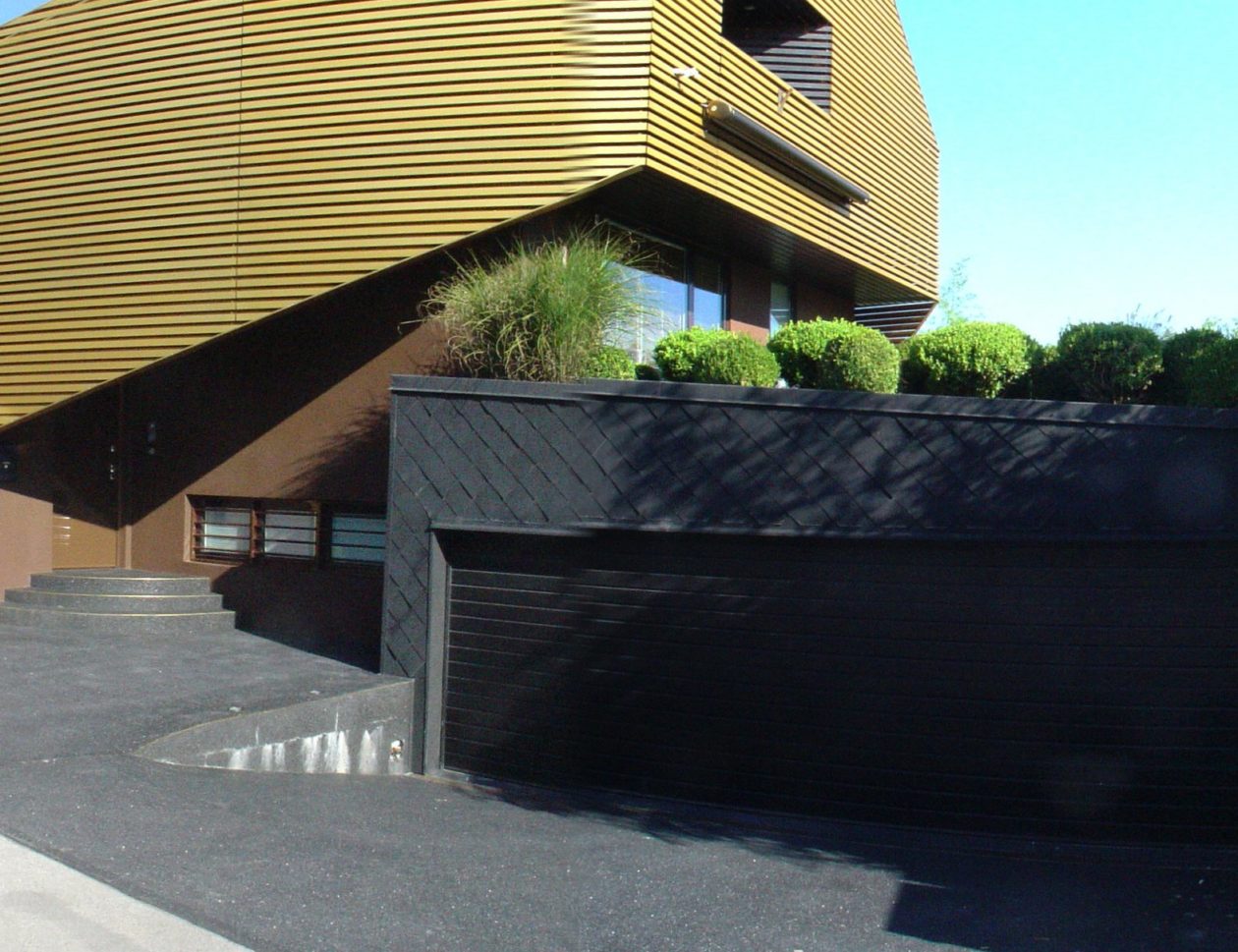 People get excited by extraordinary things that leave an impression. Albeit overreacting at first, we often realise that our initial judgement was too harsh. On the other hand, I believe there is also something called “love at first sight”.

The garden was created around a renovated house in a compact settlement of single-family houses just outside of Ljubljana. The settlement was developed from a small village situated in the midst of fertile fields. It was built in the 1960s and 70s.

The plots are small, barely large enough for a house. The architecture in the settlement is very diverse. A new house was often built right next to the old one, while the old one was also extended. Gardens are mainly limited to the narrow lawns between buildings and fences.

Our old house was given an entirely new appearance. Its architecture is very different from that of the surrounding area. Therefore, when designing the garden, we followed the architect’s idea and created a garden not at all typical for the Gorenjska region. The lines of the garden are clean and simple and relate to the simplicity of the building’s volume, which gives the impression of a giant rock formation due to the façade membrane.

The garden is limited to a relatively small lawn, which is partly raised above the basement level and therefore strongly subordinated in its position. Nevertheless, with the green and voluminous bamboo hedge, I managed to create a contrast in the garden between the surroundings and the garden space.

Regular plant shapes – trimmed boxwood balls serve as an extension of the purely architectural language. Ornamental grasses are planted between them to tone down the effect of grass and add emphasis, which gives the garden a sense of lightness with the softness of the moving stems. The garden is monochromatic.

Besides green, the only other colour is the red shade of maple leaves and, when in season, the autumn colouration of Chinese dogwood. In the evening, the carefully though-out arrangement is complemented by the lighting, which creates an almost magical atmosphere in the garden.

This website uses cookies to improve your experience while you navigate through the website. Out of these, the cookies that are categorized as necessary are stored on your browser as they are essential for the working of basic functionalities of the website. We also use third-party cookies that help us analyze and understand how you use this website. These cookies will be stored in your browser only with your consent. You also have the option to opt-out of these cookies. But opting out of some of these cookies may affect your browsing experience.
Necessary Always Enabled
Necessary cookies are absolutely essential for the website to function properly. This category only includes cookies that ensures basic functionalities and security features of the website. These cookies do not store any personal information.
Non-necessary
Any cookies that may not be particularly necessary for the website to function and is used specifically to collect user personal data via analytics, ads, other embedded contents are termed as non-necessary cookies. It is mandatory to procure user consent prior to running these cookies on your website.
SAVE & ACCEPT
Atrium sand garden next to an apartment building
Loading Comments...